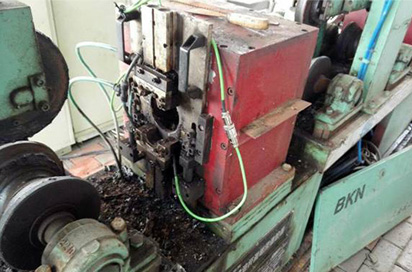 Since the finished sucker rod has a pier head during flaw detection, it will inevitably generate a beating during the operation, and a beating interference signal will be generated. Especially when the flaw detection is required for high precision, the impact of the jump disturbance on the detection result is more obvious, which seriously affects the flaw detection. The accuracy of the results. To this end, our company has specially designed a two-stage probe automatic floating tracking device to reduce the jitter disturbance to some extent. On this basis, we have developed a fully automatic roller avoidance technology. When the sucker rod head passes a certain roller, the roller automatically avoids it, completely avoiding the jump of the sucker rod head during operation. The reference ensures the stability and reliability of the test results.